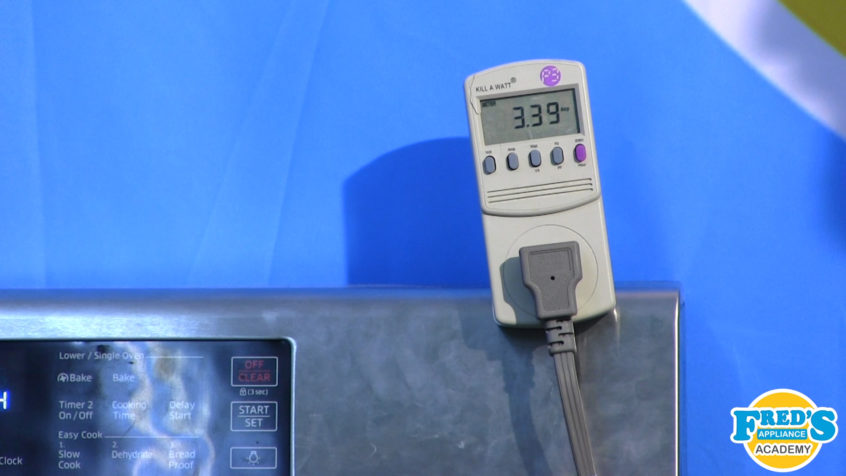 Hey everyone. Tim with Fred’s Appliance Academy here with another great video for you today. Today’s topic, we’re going to be talking about gas ranges with hot surface ignition. In your ranges you’re going to have either a flat surface igniter here, which is a hot surface, it’s going to be flat. Ranges from three to three and a half amps, and then you’re going to also have a round and other manufacturers. They range from two and a half to three amps. Now that amperage number there is very important to remember and you’ll find out further into the video here why. So we have our Samsung range here. This one does have a flat igniter, so it’s going to range between three and three and a half amps in order for this to light. Now what we want to do is we’re actually going to be showing you how to test your igniter using a Kill-a-watt meter.

Simply unplug the unit from the wall, plug an extension cord in, then your Kill-a-watt meter, then your unit, and put that in line with it so you can see what’s going on without tearing into the unit. Some of these units required for it to be pulled out in order to get to the igniter to possibly wrap your traditional amp clamp around it. Sometimes these are big and bulky to get into the areas you want to get into. So it’s not the most ideal thing to use sometimes on the road. So where the Kill-a-watt meter comes in handy with so many other appliances. Definitely going to come in handy here. We’re going to do a couple of quick easy steps here of testing the igniter’s condition. What we want to see is this to go up to three amps or more and we’re going to be able to tell that this igniter is actually good and the unit’s going to be cooking.

So what I’m going to do is I’m going to go ahead and set this for bake and it automatically comes up to 350 which is fine. And I’m going to change this over to amperage from voltage. And we’re starting at one amp and we’re already at an amp and a half, two amps, three amps. So we’re already reached that three amp goal is what we want. So we are going to go a little higher to about three and a half, close to three and a half or so. It doesn’t matter if it hits 3.5 or not, just as long as it’s above three, that’s what really matters. What’s actually happening here is with the flat surface igniters, it’s opposite to what a lot of techs think. This is what’s called an NTC, negative temperature coefficient, where most things in the field are PTCs, positive temperature coefficients, which means as it gets hot, the resistance rises.

We’re an NTC. As it gets hot, the resistance decreases. We need to have that in order for our gas valve to work because the gas valve is in series with our igniter. So what happens is as we increase in the heat, the resistance drops, so we can provide about three volts of voltage over to the gas valve for that too. It’s got a little coil around it. What happens is that heats up, it warps a bimetal inside and it allows a plunger to then release a gas into our manifold assembly to light. So this is actually cooking. We’re already up to 219 degrees so we know that this is working. So right there it tells me that the igniter is in good shape. Now I would probably run about four cycles to make sure that the igniter is not for some reason playing games, so one time it’ll work and then the next time it won’t.

Usually, if they’re a failed igniter in the field, they are running at that less amperage, you’re going to see that right away. But you really want to just make sure, test it out about four cycles. That also gives you a proper temperature inside as well because we’re looking for the entire cavity to reach that 350-degree mark rather than what we’re looking at air temperature. We need everything inside to get to that temperature there. So this is cooking here. We know it’s working and we just figured that out just by using a Kill-a-watt meter. And then obviously you can reach your hand inside, use your temp gun as long as you have a load inside of it. We actually recommend a cast iron dish to place inside the unit. Cast iron actually holds the heat in a lot more than anything else. And a laser gun is very, very accurate if you’re using it the right way.

And you can compare accuracy maybe with a thermostat on the wall compared to a load in the house. And if they both match, that’s usually how I check the accuracy of my temp gun there. So what I want to do is I want to take you over and I want to open this unit up. And we made a mock up that has both the bake and broil right on top so you can see everything that’s going to go on. So I’m going to go ahead and I’m just going to cancel this here. I’m going to power down my cooktop and take my Kill-a-watt meter here and I’m going to slide this right over here. And this is our mockup range.

What we have is we have our bake assembly in the back and we have our broil assembly back here. Now the broil igniter, I can tell you right now, it is a failure out there. We wanted to show that, so when you’re using your Kill-a-watt meter, we can see the difference. No matter if this glows red, bright red, you’re just not going to see the amperage in order to provide that three volts over to the gas valve to open up. So we’ll see the bake light here and then I’ll go ahead and switch it over to the broil. So I’m going to go ahead, plug my Kill-a-watt meter into my extension cord, and then I’m going to plug my range in. Now I do have two meters also inline with the bake igniter and the gas valve assembly. So you’ll be able to see the starting voltage of the igniter and then the gas valve, you’ll see that we get about three to four volts on our gas valve as the igniter gets hot. So I’m going to set this for a bake here.

So as you see we have 120 volts on our bake igniter. The voltage is starting to drop here. We have about two, three volts on our safety valve and we’re going to see our igniter start to glow. And with these igniters, they’re not like dryer igniters. Dryer igniter is not a common igniter that you’re going to be replacing all the time because they don’t get weak. What happens with them is they usually break. They are like a carbon like metal, but they do break. So if you ever have to replace a range igniter or a dryer igniter, make sure you don’t touch, touch the igniter with your fingers.

The oil from your fingers is actually going to go ahead and it’s going to run a hotspot on that and it could open up. So keep that in mind. So we can see that we have a constant four volts on our gas valve there and we’ve got 115 volts on our igniter. The igniter is staying on all the time. That’s the reason why customers are not telling us that their dryer’s not drying, that the igniter’s failed all the time. This one stays on all the time where a dryer doesn’t. So that’s our bake. And you can see we have a flame, we’ve got our voltage, we’ve got our amperage. The amperage on this one right now is three and a half amps. And we’re going to go ahead and switch this over to our broil. So I’m going to cancel this cycle, select my broil, and we can watch the Kill-a-watt meter here.

And we’ll see that we’re getting up into amperage. We’ll only get up to about two and a half amps. The igniter over there will get bright red, but no matter what, as long as we don’t get to that three amps, it will not open that gas valve to work. Okay, so we’re at two and a half amps igniter’s now glowing 2.6 amps, and that’s where we’re going to pretty much top out at.

And it’s glowing bright red. So right now if I were to use my laser gun on that one, the laser gun maximum will read 800 degrees. It tells me it’s overload. The closest I’ve seen is about a thousand degrees on a unit with a different laser gun that reads a higher temperature. So that’s actually really hot. But because the amperage is not there, the valve will not receive the voltage and open up. Again we could hear whooshing sounds that’s gas building up because the igniter is playing games in the system there. It teeters between a good amperage of three amps, which is still considerably good, to 2.9 which is not enough and what will happen is that igniter will get some voltage and not receive voltage and then that gas builds up, each time it opens up but does not light right away and you get a big whooshing sound.

If a customer’s complaining of that, I’d be looking at a hot surface igniter. If it’s that type of range and it’s not a direct spark range, I’d be looking at replacing that and quoting the customer out. So this makes life a lot easier. Not only just in ranges where you don’t have to pull them out, but you also don’t have to take microwaves down if they’re an over the range microwave. You can tell what’s working inside of a microwave just by putting your Kill-a-watt meter on there. We can also use it with sealed systems to see if we have a defrost issue, to see if we have a cooling issue. So this will tell us a lot before we even go in and actually physically go to the parts we think are a failure. So this speeds up your time on the road, which efficiency does matter. So you can get from call to call.

You’re not really cheating the customer because if you have a failed igniter, you still have to go in and you still have to take everything apart and you still have to replace it. But this is also a great visual for a customer too, if you can explain it in the way, like we’ve talked here where this igniter actually gives the voltage to the valve. That’s why they may have a gas smell, a whooshing sound, because it’s just playing games. It’s teetering between good and a failed igniter in the field and it’s building up gas inside. So still, we’ve been talking, we have not even lit on our broil here. So that just goes to show you that that can glow bright, red stay on, we’re just not going to get the gas.

I hope you guys really liked this video and liked how we can show you the efficient ways of doing things. And if you did, please like subscribe as we always ask that you do, look out for future videos and, again, I’m Tim with Fred’s Appliance Academy where we’re training tomorrow’s technicians today.

Don’t worry, we hate spam just as much as you do!